Posted on 8th Apr 2022 by friendsofcarringtonmossgmailcom Leave a comment

I watched this short video from Trafford Council’s leader out of curiosity.  It is only 2 minutes long so do have a listen.  Concern is expressed about the climate crisis, the recognition that it will cost billions if not addressed, the acknowledgement of the extreme weather events that we are already seeing EVERY year.

It is interesting that Councillor Western focused on issues such as flooding, air pollution and the amount of carbon in our atmosphere.  Yet, Trafford plans to decimate Carrington Moss, an area which generates a natural capital value of over £15m per annum (based on GM’s Natural Capital Account, figure 1, 2019 Natural Environment Topic Paper).

It plans to significantly increase air pollution and the risk of flooding for local residents here, and, of course, the loss of our peat moss will result in a massive carbon release event.

The climate change page on Trafford’s website provides links to examples of collaborative work “to reduce and mitigate carbon emissions as well as adapting to a changing climate”.  One of these is labelled Nature and Biodiversity.  Click on that link and you are taken to a Lancashire Wildlife Trust article (December 2020) announcing that “Nature is on the road to recovery in Greater Manchester”.

Councillor Western is quoted in the article stating that “The funding will help deliver some of the essential work being undertaken to safeguard wildlife habitats, develop natural flood management projects and peatland carbon stores, and teach families and young children about the natural world on our doorsteps”.

But he doesn’t mean here on Carrington Moss, where he is planning to unnecessarily release 169 hectares of green belt to build housing and employment space that could be located elsewhere in Trafford (or even elsewhere in GM, as residents keep being told we must consider the regional strategy, known as Places for Everyone, as a whole).

The article states “The aim is to fund natural flood management projects and peatland restoration transforming areas into carbon stores”.

But not here on Carrington Moss, which has 325 hectares of peat, that Trafford states is 3m deep.

Despite the huge numbers of additional residents and employees who will be travelling into and out of the area, there are NO plans for any sustainable passenger or freight transport options.  Instead, Trafford plans to construct a road across the Grade 2 agricultural land, woodland, wetland and peatland habitats.

Stockport’s leadership appears to understand the issues as they rejected their controversial bypass.  Council leader Elise Wilson said a new road that would “destroy wildlife and natural habitats” was an “old world solution“.

But Trafford is sticking with their “old world solution”!

Residents have ideas for alternatives to constructing a road across the Moss, but Trafford is not interested in even hearing about them, never mind exploring their potential!

Despite their declaration of a climate emergency in November 2018, and the creation of a Carbon Neutral Action Plan in December 2020 (a plan that does not even mention that Trafford has, not one, but two, peat mosses), Trafford appears confused about what sustainability actually means.  Maybe they should take a look at our previous blog!

We have also recently produced our latest Carrington Lake video which, once again, shows just how much water is captured and retained by Carrington Moss.  It’s less than 5 minutes long and highlights the level of hypocrisy we are facing from both GM and Trafford’s leadership.  We’d love to hear just how many attenuation ponds you think we’ll need to capture all that water that is currently being contained by our irreplaceable mossland.

Nationwide, it is acknowledged that the UK is one of the most nature depleted countries in the world.  The Government has an aim to leave the environment in a better state than they found it, setting targets to halt the decline in species, to improve air and water quality and increase our woodland cover.  There is a recognition that we need to use our natural resources more sustainably and that it is critical to build up resilience against the impacts of a changing climate, to enhance our natural capital to support our food security, health and wellbeing, and economic prosperity.

Yet, here in Trafford, there is a plan to further diminish the already threatened populations of red listed birds and endangered wildlife that breed and feed on Carrington Moss and to sacrifice our best and most versatile agricultural land, that future generations may need to provide locally sourced produce to survive!

It is now clear that the biodiversity and climate emergencies are comprehensively interconnected and that there are compelling reasons why both should be considered together to create solutions that reduce the risks to all populations (both human and wildlife).

Greater Manchester’s leaders declared a biodiversity emergency on 25th March, with Mayor Andy Burnham talking about the “habitats being lost, destroyed and becoming less diverse due to the impact of development, climate change, pollution and invasive species”.  Yet, he is presiding over a plan that will see huge levels of biodiversity loss across the region.

Perhaps his suggested “rallying cry” will signal a change of approach to the unnecessary loss and destruction of the region’s precious green belt!!!

Yet, while Carrington Moss is being sacrificed by GM and the local leadership, sustainability is out of the window, the biodiversity and climate emergencies are not being considered, neither is their accountability to future generations! 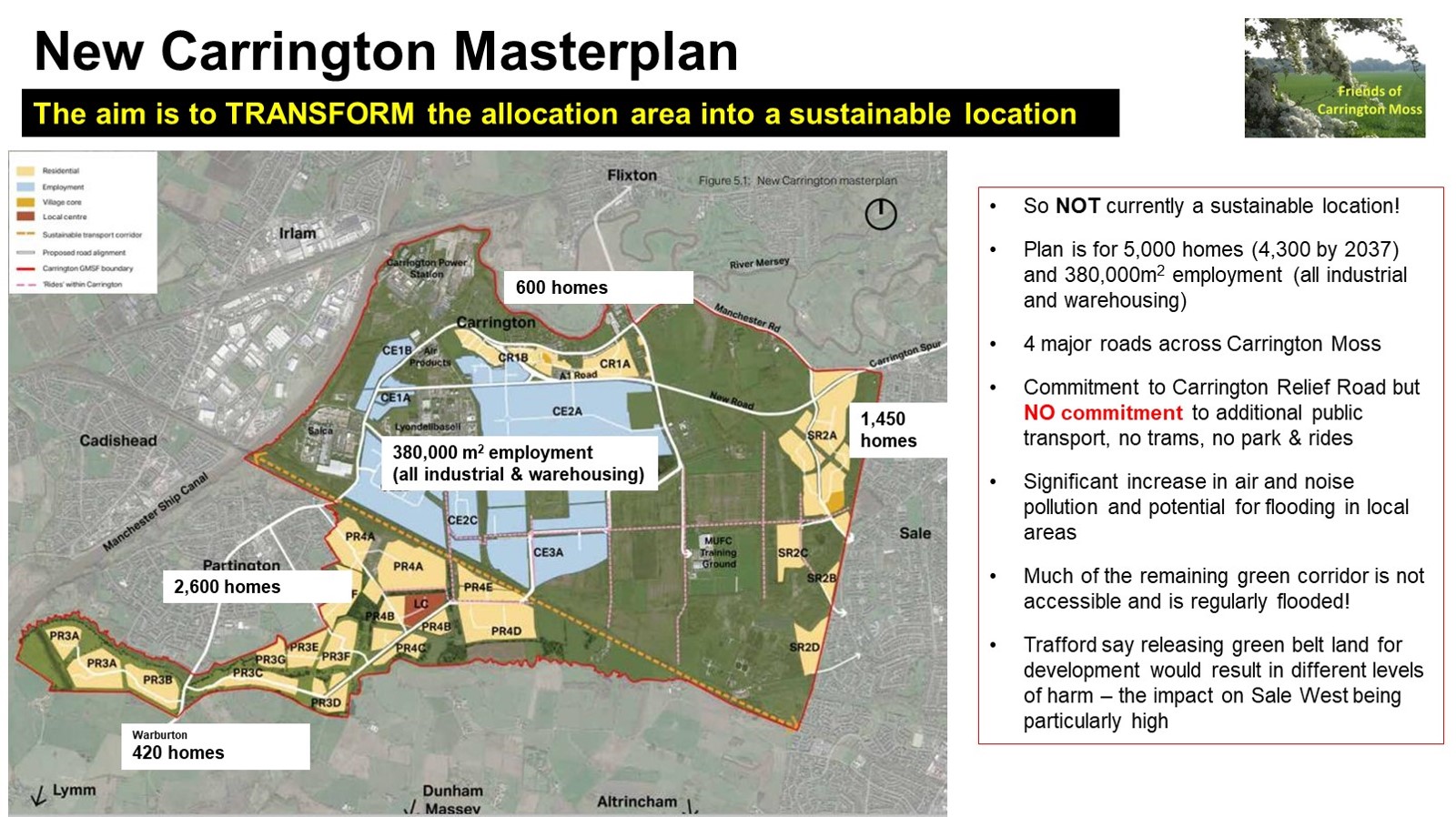